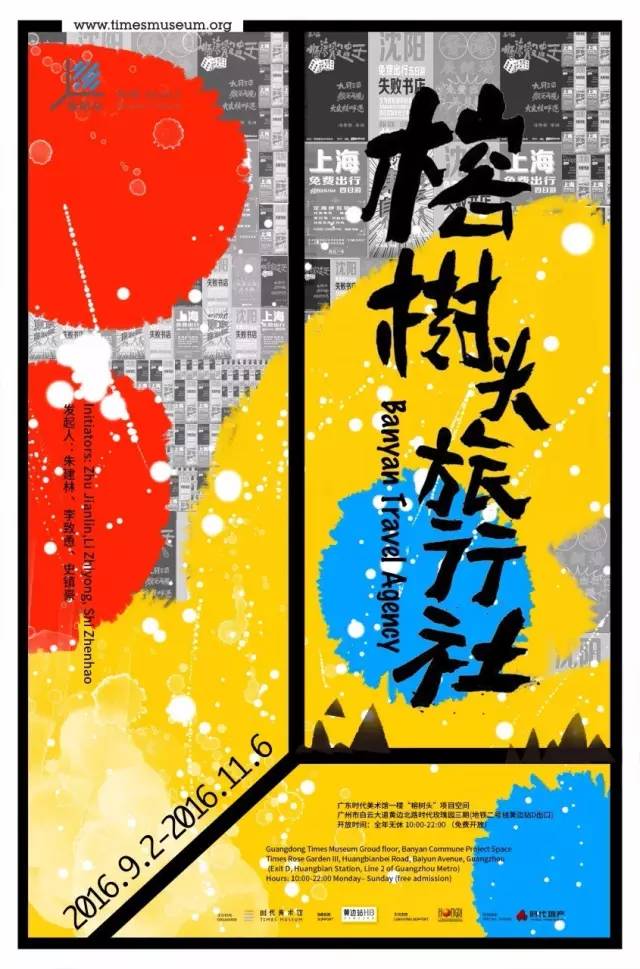 Radio Kosaten #3 is proud to present Guangzhou based artist and writer Li Xiaotian together with the Banyan Travel Agency.

Li Xiaotian works with the Banyan Travel Agency- an artist-initiated project that brings together local artists and inhabitants to travel around different cities in Asia including Tokyo and Hong Kong. From September to October participant artists from Banyan Travel Agency foster an encounter between inhabitants of Guangzhou as they report back their experience through live streamings and written accounts over the Internet. A special zone is set up in the Banyan Commune, located at the main entrance to the Times Museum in Guangzhou that simultaneously exhibits almost the real time accounts of their sojourn.

In the wake of translocalized bodies brought by globalized flow of capital and labor Radio Kosaten would like to engage a dialogue with our featured guests to discuss deeply their project with us. From this productive dialogue we hope to discuss the question of space and place in the era of Globalization. How do we imagine a different community fostered by translocalization of bodies that crosses borders and nation-states?

Radio Kosaten, powered by migrants and refugees, is an Internet radio that runs every third Sunday of the month. It aims to be a platform for solidarity and dialogue between contemporary different cultures and communities by symbolically embodying the prehistoric Austronesian boat – Balangay, which was instrumental in shaping a network of diverse cultures in Southeast Asia.

LI Xiaotian, born in 1989. Now lives and works in Guangzhou. She joined Huangbian Station in 2012, and became the coordinator in 2016. A Co-founder and the chief editor of magazine Companion. She is an artist, also engaged in critical writing.

Banyan Travel Agency brings artists/on-site practitioners together with the residents of different communities, travelling among various cities. Through the creation of or the shift towards more fleeting relations with time and space, we hope to engender new contexts for the encounters among individuals with each other, their environment, and their societal settings, while simultaneously reconsidering the visibility of capital distribution within cities. The exercise of physically wandering and the geographically related experiences that come with it enable the examination of “place”, “on-site”, “native” and “local” and their relation with work/creative production and the possibility of collaborative practice.

From September to October, Banyan Travel Agency will arrange tours to Shunde, Tokyo, Shanghai, Shenyang, Wuhan, Hong Kong as well as several local areas in Guangzhou. The routes are designed by local artists/on-site practitioners that also serve as guides. After public recruitment, the travel agency will exempt the transportation fees of those who have passed the interview process or provide them with an allowance. The travel agency is located in the Huangbian community and is equipped with functional zones for reception, browsing resources, and hosting discussions. The participants’ experiences en route will be recorded via live stream and later be published. Many events such as lectures, screenings, workshops, and impromptu markets will be arranged during the exhibition.

The Terrace, a special zone will be set on-site for the display of publications on related themes initiated by artists, writers, and other general participants.

We hope the return will become reflection: the creation of new space. Banyan Travel Agency is the first move and launch by the Travel Group project, a long-term sustainable art practice program initiated by the artists of Huangbian Station Contemporary Art Research Center in 2016.

Graduated from Department of oil painting, Guangzhou Academy of Fine Arts(GAFA) in 2012. Co-founded Fong Fo with Feng Weijing and became the Advertising Director in 2013. Work as the Project Curator in Huangbian Station since 2014.

Join Huangbian Station in 2012. Graduated from Department of oil painting, Guangzhou Academy of Fine Arts(GAFA) in 2013.

Born in Zhanjiang, Guangdong in 1988.

Join Huangbian Station and graduated from Department of oil painting, Guangzhou Academy of Fine Arts(GAFA) in 2012. Became the ambassador of Fong Fo in 2015.